This one is for Clare, Maile, Tyree, Olivia, and Jessica:

Once upon a time in Egypt there lived a young girl named Rhodopis. She was  unhappy because she was a slave. She was kidnapped from her home in Greece when she was small. She was owned by a gentleman who also kept servants. They teased the girl constantly and made her do the hardest work. After all, they were only servants...but at least they weren't slaves.  The young girl's name meant "rosy cheeked" in Greek, and it wasn't a friendly nick-name.  She was called that because her skin was white and burned red in the sun, unlike the Egyptians  whose skin "glowed like copper".  She tried to pretend that this name didn't bother her. But it did. Lonely, but needing companionship, Rhodopis turned to the animals around her home. " Birds ate crumbs from her hands. She coaxed a monkey to sit upon her shoulder and charmed hippopotamus with her songs. " Late at night, when the air was cool, she dance for her animal friends. One night, her master, who was more absent minded than cruel, happened to see the girl as she "twirled so lightly that her tiny bare feet scarcely touched the ground. " He wanted to give her a gift of appreciation. But what would be best? Slippers made of "real leather, the toes were gilded with rose-red gold." The slippers twinkled on Rhodopis' feet when she walked, and boy, did they make the Egyptian servant girls jealous! They only had straw sandals to wear. So when Kipa, the head servant girl hollered the news that His Majesty, The Pharoah, was  holding in court in Memphis and that there would be musicians, and dancing and feasting, she made sure to tell Rhodopis that she would not be going. Too much linen to wash and grain to grind...So the Egyptian girls dressed the next morning in their finery. One wore a string of blue beads around her neck. Another had jangly bracelets, and the third "tied a many colored sash about her waist." And off they went, leaving rosy Rhodopis home alone. There was nothing for it but to start washing the linen, so she began the sloppy task, singing as she worked. But the hippopotamus rose up, excited by her song, and splashed mud onto her rose red slippers. She scolded him, then rinsed her shoes in the river and began to polish them until they sparkled. Satisfied, she returned to her wash. Just then, there was a shadow and a swoop overhead. "A great falcon, symbol of the god Horus, circled in the sky with wings spread so wide that they blotted out the sun. " The girl greeted him politely and bowed her head. A moment later he was gone...and had taken one of the slippers with him! Now, the falcon flew on, up the Nile River to the Pharoah's court. His name was Amasis, and he was a young man. [Remember that King Tut was only 9 years old when he took the throne.] He was probably a teenager, and, like most youth, he preferred "driving his chariot as fast as the wind" to sitting in his throne with a heavy head dress on. Suddenly the falcon dropped the most beautiful little shoe he had ever seen into his lap. It drove him wild to think of the girl who could wear this shoe and he decided that he must marry her when he found her. So he began a search. Fortunately for him, he could use the Nile as a highway, and had his slaves row him  up and down it to check every town and village along the way.  His royal barge " was hung with sails of silk. Trumpets blared and oarsmen rowed to the beat of the gongs. " All kinds of girls and women in many places tried on the shoe...but it didn't fit. When it passed by the home of Rhodopis, she fled from the noise but the Egyptian girls ran to the water's edge, excited to finally see the Pharoah. The three of them squashed and squeezed to no avail. Amasis was about to give up when he spied a rosy cheeked girl hiding in the rushes. He ordered out and made her try on the shoe. And of course, it fit her perfectly. The Egyptian girls spluttered with anger, pointing out that she was a slave,and a Greek one at that. But Amasis said,
" She is the most egyptian of all. For her eyes are as green as The Nile, her hair as feathery as papyrus, and her skin the pink of a lotus flower. " And her and Rhodopis married, and lived happily ever after.

Notes: Shirley Climo, author of this retelling of  The Egyptian Cinderella

, states as fact that a Greek slave girl married and Egyptian pharoah in 526 B.C. 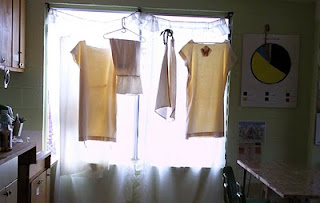 Montessori Connection: Last year at this time my classroom journal tells me that my Montessori Elementary class was beginning a study of Egypt as an outgrowth of the Third Great Lesson: The Coming of Human Beings.(see Montessori Today: A Comprehensive Approach to Education from Birth to Adulthood

). We were deep into a study of the Fundamental Needs, and research was on Egyptian art, religion and social acceptance. We used a beautiful old set of Fundamental Needs cards, which I helped the school buy from a site that was deepsixing the Montessori materials.  We supplemented the lessons with cards downloaded for free from http://edutccom.ipower.com/catalog/index.php?cPath=33 We also began to sew Egyptian dresses, made from white cotton curtains and tablecloths. You can see them here in the picture, hanging up in the sunny window of our class.
Posted by Rachel Hope Crossman at 1:00 AM