Once upon a time, in the Province of Naples, lived a man with a beautiful wife, and a beautiful daughter, "each with hair and teeth of gold". Alas, the lady took sick and died. The daughter was bereft, but the husband was mad with loneliness. Such was his insanity that he sought advice from none other than The Devil Himself. So of course he got really, really bad advice. The Devil advised that he marry his daughter, and so the man went home and proposed this idea to her. She was horrified, and fled from him. And where would she seek solace? Only at her mother's grave. Here she poured her heart out, and that's when she hears her mother's voice! It gives her some good ideas, and back she goes to try them out. She will marry her father, she tells, him. But first he must get her a dress made entirely from golden bells. Assuming he will never find this,and that her problems are over, our heroine goes back to her housework. Woe unto her, the Devil is still helping her dad, who quickly returns with the dress of bells. But wait! Begs Cinderella of the gold teeth and hair, I'd really prefer a dress with a sun on the front and a moon on the back. That will surely delay the wedding, she thinks. Alas, she is wrong again. The Devil himself produces the dress, and Dad is back before nightfall, demanding that she put it on. She hastens to her mother's grave to report that the dress delay tactic didn't work out quite as planned. Now her mother calls in the doves. Cinderella returns to her room, calling out to her father that she is just going to wash her feet and change clothes. Her father stations himself outside her door, and after a very long interval of splashing, bursts in. He is deceived! It is only a pair of doves he hears splashing in the foot basin: Cinderella has escaped. By the time Dad is watching the doves cry in her bedroom, she is at the back door of the local castle, seeking work. Clad in a wolf skin cape, she accepts a position as goose heard. The other shephards, enchanted by her golden hair and teeth, yet leery of the wolf skin nick name her Bella Pilosa: the Hairy Beauty. She stains her teeth and rubs mud in her hair to escape the wandering eye of the shepards, but she is too late. She has already caught the eye of the prince! He begins spending time in the hills with the geese and their beautiful, hairy, shepherd girl. One day he begs her to come to the ball his father is throwing. She is horrified, and refuses, running away. On second thought, she bathes in the stream, dons the dress of golden bells, and slips into the ball. There, the prince becomes even more enamored of her and slips a ring onto her finger. This frightens her, and she flees. The next day in the field, the prince  comes and demands to see the ring. But she has hidden her hands under a pile of rags, and feigns no knowledge of the ball or the ring. Again, he beseeches her to come to the second night of festivities, and again she refuses. Yet when he has gone, she pulls out her dress of sun and moon, and, so attired, once again slips into the ball. Now the prince swears he will not let her go, and pushes a bracelet onto her wrist. And again she runs away, and again she hides her hands from him next day. Now the young prince confides in his mother: he has fallen in love with this girl, who looks just like Hairy Belle the Goose Girl. In fact, he declares, he would marry her even if she were Hairy Belle! Well, this is too much for his mother, who forbids further discussion of the matter. But now the prince falls ill. After the doctor has tried many remedies, he decrees that the only cure is a dish made by the woman the prince loves. Begrudgingly, the queen sends flour to Hairy Belle, who bakes a cake. And slips the ring into it! The prince of course eats the cake and finds the ring, and says he feels a bit better. But he needs some more cake to regain his strength. So more flour is sent, and another cake baked. And this time, in goes the bracelet. This is the final proof that the prince needs, and he pulls his mother the queen out to the goose pen to see for herself. There is Hairy Belle, only she is not so hairy now as she has cast aside the wolf skin. And Hairy Belle kept on tending the geese, and the prince kept on calling her Hairy Belle, and the queen was glad of a bit of female company. And they all lived happily ever after! As for her father, that wicked old man never did figure out how his bird had flown, and the Devil wouldn't help him find her. 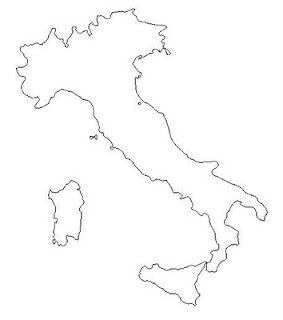 Notes: This is a fairy tale collected in the Province of Naples, as told by a gentleman named Vittorio Imbriani in 1883. It is included as story #147 in Marian Roalfe Cox's Cinderella: Three Hundred and Forty-Five Variants of Cinderella, Catskin, and Cap O'rushes

, published in 1892 by the Folklore Society, and available again. Montessori Connection 6-12: History, Western Civilization: Rome. 1. Find Italy on a map of Europe. 2. Get a large, clear map of just Italy such as the one above. 3. Find Naples. 4. Find Rome. 5. Find Chiaravelle, Italy (birthplace of Maria Montessori).  6. Find a biography of Maria Montessori, such as Mammolina: A Story About Maria Montessori (Creative Minds Biography)

if you can find it or Maria Montessori: Knight of the Child

. Perhaps easier to find is Maria Montessori: A biography for children