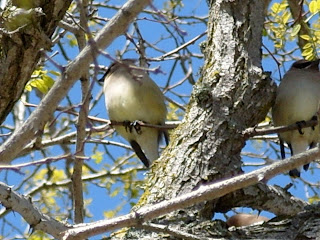 Once upon a time there lived a gentleman and his daughter, left alone and sorrowful after the death of the girl's mother. The father took a second wife, with two daughters. Unfortunately, they were a not kind girls but spiteful and jealous of their new step sister. They made her do the dirtiest jobs, then mocked her as she sank down to rest by the fireplace. " Cinderella! Cinderella! they chanted together, laughing at the joke they had made at her expense." One her father was going to town and asked what trinkets he could bring back for the girls. One step daughter asked for a pearl necklace and the other for a satin gown. Cinderella asked for "The first twig, Father, that brushes against your hat on the way home." This was done. The twig was given, and Cinderella took it to the garden and planted it next to a white rosebush, which reminded her of her mother. So she began to cry. Suddenly, the branch grew to a small tree and a little white bird landed in it, and began to sing. So sweet were the notes that "it eased the sadness in Cinderella's heart." She began to save crumbs for it and to feed it every day. The years passed and all three sisters grew to become maidens. Cinderella worked so hard, for so many years that she had all but forgotten she had been anything but a serving girl. One day, news came that the king's son was going to host a ball, and that all the young ladies of the kingdom were invited. That it, all of the eligible young ladies. This meant that the lady had to be rich, from  an important family and someone the king and queen wanted to invite. Cinderella begged to go even as she cleaned and brushed, stitched and steamed the clothing for her stepmother and sisters to wear. When the sisters heard this they howled with laughter and said she'd be laughed right out of the ball if she showed up. But the girl persisted, and finally the stepmother said, " If you can put all those lentils back in the bowl in two hours, you can go!". With that, she hurled a dish of dried lentils into the ashes. Cinderella despaired but as she gazed out the kitchen window, a little friend showed up! The white bird from her hazel tree landed on the windowsill and Cinderella said, " Oh sweet bird, if only you could help me..." and tells him of her task. The bird sings, calling other birds  to help, and hundreds of them fly in, sort the lentils, then fly away again. But when the stepmother is shown the full bowl, she sneers, " Foolish girl! did you think I was serious?" and goes on to tell the child that she has no proper clothes, thus cannot go. Coldly, she leaves the sad and dirty girl crying as she goes off to the ball. And now the tears begin to flow. Lonely, feeling unloved and despairing, Cinderella sobs and sobs. That's when she hears a voice. " So, you want to go to the ball? What are  you waiting for? Fetch me the largest pumpkin from your garden." This is tapped with a magic wand brandished by her fairy godmother. Mice are requested from the trap and "her fairy godmother changed them one by one into beautiful dapple-gray carriage horses." A whiskered rat becomes the coachman; lizards become footmen. But what about her clothes? " Not to worry, my dear" says this kind god mother, and with a wave of the wand she transforms the ragged dress into one "of golden silk, embroidered with pearls." Her shoes "were dainty slippers made entirely of glass". With a warning not to stay at the ball before midnight the fairy godmother disappears. At the ball, the prince strikes up a conversation with Cinderella and as "they talked and laughed, Cinderella felt happy for the first time in years. " Yet too soon, the clock begins to strike 12. Running down the stairs, the magic dissipates, she stumbles, and is left in rags, tumbling to the ground. She makes it home before anyone else gets there. The next day the prince begins a search for the chatty girl who lost a glass shoe on his stairs. Searching the entire kingdom takes some time, but eventually the prince, his servant, and  the shoe show up at the family's home. First the elder sister is presented, and she tries but fails to get it on. Her "huge toes" are too big. Next her younger sister steps forward but "she could not force her heel" into the shoe. This prince is determined to find the girl he became so fond of. " Who is that [girl] in the garden then?" he demands to know. The stepmother brushes him off but finally, Dad takes courage. His daughter is so lovely and she suddenly reminds him so much of his long dead wife. " That is my daughter" he declares, and the rest, as they say, is history. Cinderella slips on the shoe, produces the other from her pocket, and then the bird comes back. Brushing her hand causes her dress to "become a gown of shimmering silk". Now the stepsisters come forward and beg forgiveness, which Cinderella offers promptly. But on the day of the wedding "it became apparent that [they] would not be in attendance." Birds again! The little white one who sang so sweetly turns out to have a flock of friends who mean business. When the trio of mean gals and their mom tried to come out, " the birds in the garden flew at the women with fury pecking them until they fled for their lives. " But Cinderella and the prince lived happily ever after!
From Cinderella

I found this version at the main branch of the Berkeley Public library. http://www.berkeleypubliclibrary.org/children/I was intrigued by the mixture of Perrault ( the gentleman for a father,the glass slipper, and other elements are drawn from his telling). The illustrations show 17th century French court dress, betraying his influence on this retelling.  Opulent palace interiors, and lush garden scenes with birds and flowers, pumpkins, rats and lizards make this delightful to browse through. With its fairy tale fluff, pink satin and silver sparkles, it is a quintessential Cinderella princess vision for a little girl.
For me, it taps into the deepest Cinderella memories I have, echoing scenes in the 1965 t.v. version. (Tall green cone hat for the mom, curved, almost cattle-horn shaped ones for the wicked sisters. And that prince in his tights...unforgettable to my eight year old self).
The Grimm Bros. influence is here too:  the role of the  hazel twig, the little white bird as helper animal, the lentils tossed into the ashes. It seems odd that the Grimm collected/German step mom appears at first to give Cinderella  a fighting chance to go to the party if she can sort the lentils. She becomes crueler, I think, for this taunting. The French step-maman is brutally honest and gives no false sparks of hope. Interesting that this results in the magic of a fairy godmother appearing. It makes me wonder which is the closer scenario to possible reality, the fairy or the bird helper? As a girl I once knew used to say, What if? In this case, what if a girl really did train a bird by feeding it and talking to it? Might it also be trained to sort lentils? It seems like it could happen...And is it really out of the question that someone might come to a sorrowful young girl's aid? What if....there had been a grandmother in the house all the time, but she was really old and so hardly ever moved or talked. But today she hears how sad the girl is and so she gets out her old wedding dress which she has saved all this time in a chest and give it to the girl and she runs to the ball! Hey, it could happen!
Posted by Rachel Hope Crossman at 1:00 AM