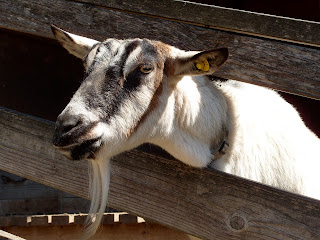 
Notes: This tale is one collected by the Grimms in the 19th century. The only difference I can see to this story and a "real Cinderella" is that there are no shoes involved. The helper animal as a goat is a great touch, and the illustrations in this are goofball good!

Montessori Connection: 6-9 The Noun, Singular and Plural. Find: eye/ eyes, sister/sisters, apple/apples. Be sure to look for: leaves. What is the singular form of that word?  9-12: Scientific Classification. Goat: mammal, ungulate, bovid, subfamily Antilopinae.
Posted by Rachel Hope Crossman at 1:00 AM