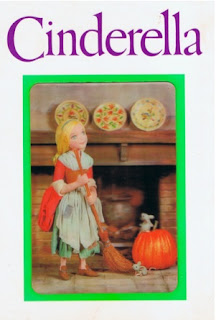 Once upon a time, in France, there was " a girl who was as good as she was beautiful. She lived with her stepmother and two ugly stepsisters, who made her do all the hard work, scrubbing and cleaning and tending the fire. Because her ragged clothes were always covered with cinders and ashes, she was called Cinderella. One day, a handsome prince invited the stepmother's two daughters to to a grand ball. The immediately bought fine dresses for themselves. Then they teased Cinderella cruelly because she had not been invited. Cinderella said nothing. Instead, she helped them dress properly for the ball. When the time cam for them to leave, Cinderella followed them a bit, holding back her tears,  and then returned to her fire, where she burst into sobs.  Suddenly, her fairy godmother appeared beside her.  "If you would like to go to the ball," she said, "run into the garden and bring me the largest pumpkin you can find. "  Cinderella, being obedient, brought back a heavy pumpkin and set it before the fairy, who tapped it with a wand.  Instantly, the pumpkin was changed into a large golden carriage, with seats of satin.  Next the godmother asked Cinderella to fetch a mousetrap from the pantry.  Cinderella brought back a wire cage containing six lively mice.  The fairy changed each mouse into a beautiful horse.  "Now for a  coachman," said the fairy.  "Do you suppose that you could find a rat?"  It was found — in a rattrap— and it was changed into a fine coachman just by a tap of the wand.  Finally Cinderella herself received the magic touch.  In a twinkling she was dressed in the most beautiful gown she had ever dreamed of.  On her feet she wore a lovely pair of glass slippers.  "Now you may go, " the godmother said, "but remember — the magic ends at midnight.  One moment after that time you will be back in rags. "  Cinderella promised to remember as she stepped happily into the elegant carriage.  At the palace, the prince was told tha a princess whom nobody knew had arrived.  He ran out to greet her and led her into the ball.  "Oh how beautiful she is!"everyone whispered.  No one, least of all her stepsisters, recognized Cinderella.  The prince led her out to dance, and more dances followed.  The prince never left her side.  He had fallen in love with her.  So happy was Cinderella that she gave no thought to the time — until she heard a clock striking twelve.  With a quick curtsy to the prince, she started off and ran away.  Puzzled, the prince followed her as fast as he could, but her could not catch her.  The guards at the gate said that they had seen only a poorly dressed girl hurrying by.  As the prince turned to go back, he noticed a glass slipper on the palace steps.  It could only mean that the beautiful princess had lost it while leavng.  Cinderella, in the meantime, limped home on one glass slipper.  She was breathless, weary, ragged and cold as she reached her chimney corner.  Some days later the prince announced that the girl whose foot the glass slipper would just fit would be the girl he would marry.  The slipper would be tried on the foot of every lady in the kingdom.  the prince himself went from door to door to find the beautiful girl .  But though many fine ladies tried it on, the glass slipper fitted none of them.  At last, the prince arrived at Cinderella's house.  The two stepsisters , rudely pushing Cinderella aide, tried eagerly to get their clumsy feet into the glass slipper.  But, of course, it was of no use.  "Let me try" Cinderella said in a shy voice.  "You!" cried the stepssisters., laughing unkindly.  "Go back to your cinders and ashes at once!"  But the prince looked for a long time at Cinderella's lovely face.  He invited Cinderella to sit down, and then he himself put the slipper on her pretty little foot.  The fairy godmother appeared suddenly, touched Cinderella with her wand, and once more Cinderella stood dressed as she had been the night of the ball.  Then Cinderella left for the palace with the handsome prince, where a magnificent wedding took place and they lived happily ever after. 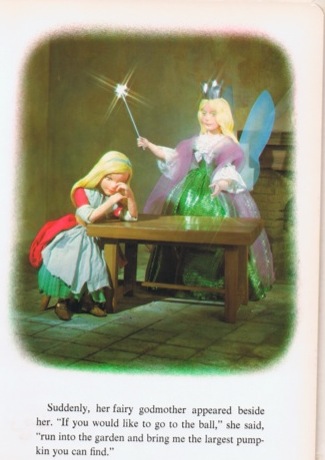 Notes: These dolls are dressed in fairly accurate 17th century costumes.  As we can tell from that as well as from details in the story line, this is a Perrault derived Cinderella.
Montessori Connection: Ages 6-9:  Look for verbs that are new for you. ( tending the fire, burst into sobs, appeared beside her, being obedient, brought forth).
Ages 9-12: Fundamental Needs, Clothing.  Look at the  prince's outfit carefully and write a paragraph describing exactly what he is wearing.  See if you can use these words: hose, cravat, tunic, brocade.  Now look at Cinderella while she is in rags. Write a paragraph describing her clothes.  Try to use these words:  shift, bodice, apron. Now look at her in riches.  Try to use these words:  corset, headdress, ribbons, ruffles.   Or: Draw a timeline of French history during the 17th cetury. Place Perrault's publication of his fairy tale collection in 1697.  Research King Louis XIV, and put his reign on the timeline.  Find out who  Marie Antoinette was.
Posted by Rachel Hope Crossman at 1:00 AM