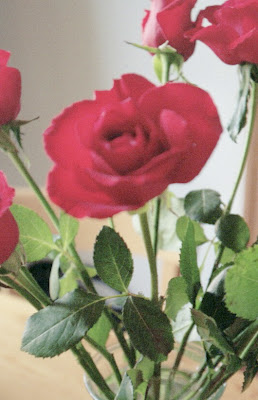 Once upon a time, in Brussels, there lived a king. He had three daughters, and, one day, he decided to see who loved him best. When he posed the question, the eldest said that she loved him "as the apple of her eyes". The middle daughter declared that she loved him "as her life". But the youngest, who "was busy putting salt into her milk-porridge, said,'As salt." This angered the king so he drove her away from home. She was allowed to take only three dresses, and three pairs of shoes. She chose a dress of blue satin, one of red satin, and one of white. She walked until she was tired, then crawled into a hollow tree and fell asleep, In the morning, she saw a peasant girl. So she traded her traveling gown for the girl's rags and hid her satin gowns in the tree. Then she went to the nearest castle and begged for work. She is given a place in the scullery, and does all manner of damp and dirty work. On Sunday, she begs leave to go to church. The cook tells her that she may if only she will kneel in a corner where no one can see her.  The girl, now known as Vuitji-Vægt-Den-Oven, or She Sweeps the Oven, instead runs to her hollow tree and changes into the blue gown and slippers. She goes to church and the "son of the castle" sits next to her. When the service ends, Vuitji-Vægt-Den-Oven runs away, losing a shoe. Now the prince despairs, and takes the little blue shoe to all of the household. No one can wear it, so they allow the servants to try. When Vuitji-Vægt-Den-Oven gets her turn, it slips right on. The lady of the house says, "Well, Vuitji-Vægt-Den-Oven, you have beautiful feet." The following Sunday, all proceeds in the same manner. This time Vuitji-Vægt-Den-Oven changes into her dress of red satin, with matching gloves. And this time, when the service ends and she runs away, she drops a glove in her haste. Again the prince summons everyone in the kingdom to try on the item lost by the mysterious lady from church. Once again, it will fit no one above stairs, so it is taken down to the servants. When Vuitji-Vægt-Den-Oven takes her turn, it slips right on, and the lady of the house says, "Well, Vuitji-Vægt-Den-Oven, you have beautiful hands." The following Sunday, the girl wears a dress of pure white silk to church, and diamond rings on each of her fingers. When she tries to run away at the end of the service, the prince grabs her hand. He succeeds only in pulling off one of her rings. When he tries it on the ladies of his household, he finds that it will not fit. Of course, it does fit Vuitji-Vægt-Den-Oven. Now the prince is mystified, and wonders if she knows the strange lady who comes to church. Vuitji-Vægt-Den-Oven says that she knows where to find that lady, and runs off to her tree. There she "dresses, jumps into a carriage" and drives to the castle. Meanwhile the prince has asked his mother for permission to marry the mysterious lady from church, if only he can find her. She agrees. Just then, Vuitji-Vægt-Den-Oven arrives, dressed in her gown of silk. The prince recognizes her at once, and they are married. That's when she tells him that she is really the daughter of a King, though she has been cast out. They travel to her father's castle, and find that he is a broken man. His older daughters, distraught at the casting out of their younger sister, have deserted him. Vuitji-Vægt-Den-Oven and the prince move into his castle, and they happily for several years, until the old king dies. The prince and his bride, who no longer sweeps the oven, rule in peace for many years.
From Cox, M. R. (1893/2011) p. 306
Notes: This seems to be a combo Catskin (with unlawful marriage, though no gown of weird design), and King Lear/Meat Love Salt. I love that she wears so many diamond rings!
Posted by Rachel Hope Crossman at 1:00 AM